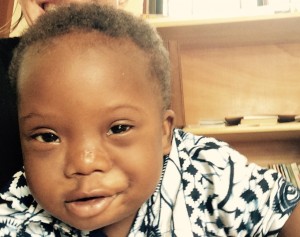 It’s been a while since I last updated everyone on all the progress being made! Sometimes I feel like I haven’t been doing anything but schoolwork this term, but then I remember that I’ve been spending copious amounts of time writing my thesis as a collection of stories of many of the children we have worked with in Ghana. Though it’s not direct fundraising, I see this type of advocacy as a crucial piece of the puzzle, and I hope that one day I can share these stories with many more people.

But alas, good things are happening for many of our beloved friends in Ghana. Etornam, Nina, and Gloria are all continuing to go to physical therapy. With their new sitting frame, Etornam and Nina are working on sitting up, and Gloria continues to use her foot splints to help her feet align correctly so that she can walk. The facility that assessed them and built the sitting frames, though based outside Accra, is making a visit to Ho tomorrow, and we have several children and adults who will need an additional consultation from them to sort out some issues. David, for example, has new leg braces, but they seem to be pinching him, so we want to get them fixed as to avoid any pain that both hurts him and prevents him from progressing. Akorfa and Holornu should both be getting their prosthetic legs soon.

As for some of the others, Carrie shared some insights that made me want to hop on a plane and go back right now. Courage, for example, has his new calipers and is working through physical therapy, and has received a wheelchair from some kind missionaries so that his mother does not have to carry him around in the meantime, as he is a growing boy. Carrie laughed as she told me that his mother, whenever she sees Carrie, throws her hands up in the air and praises Jesus because she is excited about Courage and thankful to absolutely everyone. She sells peanuts, so she always gives Carrie a free bag when she sees her around town. However, Courage, along with Denis and Shine, will most likely need a surgery to correct his feet before he can progress further. There seems to be an endless series of consultations that all of them must undergo before we can get more information, but we are crossing our fingers that they can get in with some American surgeons who will be visiting the Volta Region in January.

Kwame and Kelvin may need special wheelchairs, as they, like Courage, are getting much too heavy to be carried around. Often carrying their growing children day after day can become such a burden on the mother, and Carrie and I really think that a wheelchair, by alleviating that burden, would be such a huge morale boost.

And then there’s Justine and Sedem. Justine has been growing so much since her surgery in September. She is now trying to crawl! I can’t wait to see how big she’s gotten next time I see her. As for Sedem, he and his mother visit the Kekeli office regularly, and we just got informed that he will need a heart surgery that cannot be done in Ghana. So now I am on a mission, because Sedem absolutely deserves the best of opportunities, and a heart surgery, though very costly, will give him that. I’ll report back with more details when I have them, but I anticipate that in the new year we will begin a new fundraising campaign, part of which will focus on making sure Sedem can get his surgery.

Moreover, the ramp project was a huge success! I was conversing with Dickson, who oversaw their installation, and he was telling me how outwardly grateful everyone at the school was, and I wanted to relay that information to you all. You did that. I’m really just a mouthpiece. But now there are so many more kids who can access their classrooms, and that’s pretty damn cool if you ask me. I really hope we can build ramps for more schools in the future.

Like I said, I’m itching to get back on the plane, and I’m excited to focus on fundraising in the new year. Please don’t hesitate to contact me if you want to get involved or if you have any particularly creative fundraising ideas!

As for now, madasi pa (thank you)!